Friendship, Fun and a Vespa: How Disney and Pixar's LUCA Inspired My Kids to Build a Scooter 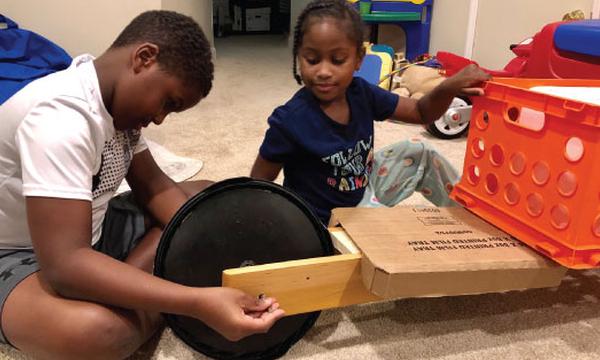 Ah, the magic of summer. Endless days of fun, freedom and no school! Backyard play, time with friends, pool fun, road trips and of course family movie nights have kept us busy. Our favorite flick this summer is Disney and Pixar’s Luca.

It's a heartwarming movie for the whole family and now is your chance to own it on Blu-ray. Also new on Digital.

This whimsical story took us on a fantastical journey full of wonder and dreams. We found ourselves transported to a picturesque Italian seaside village where culture, food, family, community and simplicity of life were on full display above and below the sea.

Lurking beneath the water is an adorable wide-eyed sea monster named Luca. Full of curiosity, precocious Luca spends his days herding goatfish and dreaming of life beyond the sea. However, his parents forbid him to visit the surface in fear that the humans will harm him. Meanwhile the humans of beautiful Portorosso are just as much in fear of the sea monsters as they are of them. Their parallel lives seem worlds apart, yet are closer than can be imagined.

The fear and unwillingness to accept each other divides them until Luca meets and develops an unlikely friendship with Alberto, an inquisitive orphan. Alberto spends much of his time above the surface in his hideout on a deserted island surrounded by human items he’s stolen and collected. Following Alberto, Luca is lead to the surface where he quickly discovers that on land he becomes human. The two spend hours daydreaming and role playing life as humans with the odds and ends in Alberto’s hideout appreciating all but most especially, the Vespa (an Italian Scooter). “You just sit on it. It takes you anywhere you want to go.”

The Vespa symbolizes freedom, the vehicle to living out their dreams. Enamored with the Vespa, Luca convinces Alberto that they can build one with the junk treasures in the hideout. Together they craft the perfect scooter and take it for a spin. Of course it falls apart mid-way down the hill but the two never give up and spend hours upgrading and riding the scrapped-out scooter.

After his mother discovers he’s been spending time above the surface, she arranges to send him to the depths of the sea to live with his uncle. Refusing to give up on his dreams, Luca swims away with Alberto on an imaginative journey to Portorosso searching for a life beyond the sea …and a real Vespa.

This coming-of-age film embraces the value of true friendship, acceptance of ones self and celebrates dreaming big. Over the past year, I have watched my 8-year-old son Zaine and 4-year-old daughter Olivia develop a truly unique friendship and become lifelong besties.

Like Luca and Alberto, Zaine and Olivia fell in love with the scooter and set out to build one. These two have spent countless hours together in their basement bunker, sharing their dreams and thoughts and collecting treasures of their own. Seriously, as soon as I throw a bottle or box in the recycle bin, it disappears to the bunker for some random project or experiment. So building a scooter out of scraps and spare parts was a challenge they couldn’t wait to take on.

After scouring the bunker, garage and their dad’s hideout (aka the shed), the kids found the perfect items to build their scooter. They collected a couple spare wheels from an old beach stroller, scrap pieces of wood, a crate, some boxes, a bucket top, a storage container cover, a couple of hangers, duct tape, some nails and a few other knick knacks.

Not every piece worked but eventually the scrap parts started to take the shape of a scooter.

The kids grew more excited as they saw it come to life just like in the movie.

Once completed you couldn’t wipe the smile off their little faces. Now the challenge was riding their masterpiece. They got in a few scoots before the front bucket top wheel collapsed under them.

Building this scooter further enhanced the friendship, trust, loyalty and love that Zaine and Olivia have for one another and created another lifelong memory.

Luca and Alberto embodied the same qualities that only grew stronger throughout the film. The underdogs stuck together through the fun, challenging and fearful times. Proving to all of us that accepting one another with all our differences, treating one another like we would like to be treated and valuing each other can bring us together.

Luca is available to own on Blu-ray or new on Digital. Get it now!